I have used a Tom Tom GPS for the last year or so and I wanted a better unit that had Traffic too, so I decided to
get a Garmin Nuvi 2555 LMT with lifetime maps and traffic.

First off, the Garmin has the entry process all wrong! It asks for the address number first, street second and state last.
So if you want an out of state address, it suggests only locations in the state you used last.
Tom Tom asks for the state first and street and number last so that it can suggest a number range.

When driving the Garmin 6 inch screen is largely empty of information and the street info is listed as the next street
intersection coming up top. It tells you the street you are on briefly, but it is easy to miss.
The 4.3" Tom Tom has the current road listed on screen at the bottom with streets listed on the map.

The Tom Tom also has a Traffic Signal warning application that can be added for free. It beeps at camera monitored
intersections. Garmin has very little in the way of add ons! More on that later.

Automatic Updates when you least expect it!
So today I was working on my PC and the Garmin Express program had a popup in the taskbar tell me that it had an update
and that it was downloading. I thought, WOW, it is downloading a new map and all I have to do is wait until it is ready
and attach the GPS unit. After about an hour, I clicked on it and up came the program window. I attached the GPS
with a USB and it continued building the map. When it was done, it just sat there! I had to unplug the GPS and plug
it back in to get it to start reading the device. Progress bars tell you nothing as they scroll across the screen for an hour!

When I unplugged the GPS to plug it back in, the screen said it was still connected too!

I decided to add a coup car image from the Add On's part of the program:

The add on's tell you little about what you will get! The picture looked pretty pathetic.

Then the screen of DOOM came up telling me that the GPS could not accept the map update! NO SPACE!

The GPS was out of drive space and it wanted me to insert a Micro card like they grow on trees!

I decided to see what was unnecessary on the device so I went into My Computer:

The list of folders is on the left. What I found in them was a TON of stuff I did not need!

Pictures folder had pictures from all over the world with a few Garmin headquarters buildings. I removed all of them
and most of the voices in other languages. There are also a bunch of languages that can be removed from Help!

So now I try to RETRY loading the map and the Garmin Express program freezes! Now I have to start ALL OVER:

At least this progress bar tells you the actual progress!

FINALLY, I am done and I put it back in my car! Now Garmin Express is telling me it has another update

NO WAY! I already spent FOUR HOURS to get what I have
Please acknowledge and thank members who answer your questions!
QB64 is a FREE QBasic compiler for WIN, MAC(OSX) and LINUX : https://www.qb64.org/forum/index.php
Get my Q-Basics demonstrator: https://www.dropbox.com/s/fdmgp91d6h8ps ... s.zip?dl=0
Top

I turned off the Garmin last night and it keeps turning back on.

Beware of the Simulation mode! The GPS acts like it is doing a trip and all information entered may be lost! I had one heck of a time getting it out of simulation mode when I first got the unit.

I even held the power button until it asked me if I wanted to shut it down. Still kept coming back on!
Please acknowledge and thank members who answer your questions!
QB64 is a FREE QBasic compiler for WIN, MAC(OSX) and LINUX : https://www.qb64.org/forum/index.php
Get my Q-Basics demonstrator: https://www.dropbox.com/s/fdmgp91d6h8ps ... s.zip?dl=0
Top

Open spaces on a bigger screen:

The road you are on is always in the center, which leaves a lot of room for information on each side. Even side street names are often missing.

The Time changes with the Time Zones. Why you need the Elevation above sea level is to put something in that space. When in destination mode,
that space tells you the miles to go. The map could have at least had I 70 to tell the road I was on in Kansas. The next Exit road is listed at the top.

The blue spot on the left is probably a small lake LOL.

I did find the Search to work quite well! I was able to find a PNC Bank and it listed a few Walmart's within 16 miles.
Please acknowledge and thank members who answer your questions!
QB64 is a FREE QBasic compiler for WIN, MAC(OSX) and LINUX : https://www.qb64.org/forum/index.php
Get my Q-Basics demonstrator: https://www.dropbox.com/s/fdmgp91d6h8ps ... s.zip?dl=0
Top

The Garmin found several traffic incidents on my trip out West. 2 or 3 wrecks were already cleared by the time I got there.

Traffic congestion was found, but it offered no alternatives and most times it was too late to do anything about them. The road color turns orange or yellow.

It missed most construction projects and there were a lot of them on Interstates 70 and 40. Only one was shown as a barber pole colored road instead of the normal pink road. In all I had about 10 warnings, but most were too late.

My biggest complaint is that it displays the current Interstate number as a symbol whenever it feels like it instead of keeping it somewhere on the screen. The car symbol even runs over it as it creeps down the screen and then totally disappears for a good length of time. Crossroads are seldom even displayed, just the next Exit is listed at the top.

Most Rest Areas are also listed, which was a plus, but that is in mapping mode only. When wired to the accessory switch, the Garmin comes on and then will automatically go into mapping mode if you don't choose a destination. If the Garmin is plugged into a cigarette lighter socket, you must turn it off and on manually. It will turn off automatically after Accessory power is lost with a countdown.

Each Exit is listed as AHEAD instead of telling you how far ahead. I already knew that! Why would it tell me about things behind me?

When in destination mode you get no other information than the next street turn or Exit. Touching the screen displays a + or - sign to zoom in or out, but that doesn't help much as little information is displayed. Food, gas stations and a few company symbols is all that is displayed along the way. I found myself going off of the destination mode to find rest areas or road names. There is a red X on the right side of the screen that cancels the destination mode. You can also cancel Traffic mode there too.

I had to type in "Hotel" in the Where To... Search. After that it suggested Hotel as a word after that until other searches pushed it to the right on the list. Search works pretty good however! Just don't search for I70 as it lists all businesses with I70 in the name instead of the actual road and some may be miles away from the actual road.

I'm not sure how other Garmin models work, but it may have something to do with the price you pay.
Please acknowledge and thank members who answer your questions!
QB64 is a FREE QBasic compiler for WIN, MAC(OSX) and LINUX : https://www.qb64.org/forum/index.php
Get my Q-Basics demonstrator: https://www.dropbox.com/s/fdmgp91d6h8ps ... s.zip?dl=0
Top

Update: Had to update the Garmin Express program then the software and maps.

Express came up and made me close it again so it could update itself...?

15 minute map download took 5 just to start, installed and FAILED! Had to re-install the map just like last time when I had to remove files to get enough disk space. It installed correctly the second time, but it never said why it failed either. It did suggest that I could remove part of the map, but it never said how.

15 minutes would be pretty good if the installs would work the first time!

My Tom Tom takes an hour and a half because it always has to backup before it does the final map change updates the second time. When are these folks going to fix this downloading stuff? We don't have time for this crap!
Please acknowledge and thank members who answer your questions!
QB64 is a FREE QBasic compiler for WIN, MAC(OSX) and LINUX : https://www.qb64.org/forum/index.php
Get my Q-Basics demonstrator: https://www.dropbox.com/s/fdmgp91d6h8ps ... s.zip?dl=0
Top

The 4G micro SD card I had in it failed to Format using FAT32 in an SD adapter card and micro USB
adapter! It never did that before! Sometimes Garmin would see it and sometimes not...

Another 32G micro SD card failed to work until I reformatted it! IE: get rid of existing files and folders...

The Garmin device does not display the memory card while updating onto it...REAL HARD TO FIND.

After all that, it only used 2.5G of the micro SD card, like Garmin can't afford more space?
At least it only puts the map on it, so I can go get a smaller card, but it STILL took over 50 minutes to do it!
Please acknowledge and thank members who answer your questions!
QB64 is a FREE QBasic compiler for WIN, MAC(OSX) and LINUX : https://www.qb64.org/forum/index.php
Get my Q-Basics demonstrator: https://www.dropbox.com/s/fdmgp91d6h8ps ... s.zip?dl=0
Top

Go into Settings and set old version to copy files to both computer and GPS...

REAL STUPID!
Please acknowledge and thank members who answer your questions!
QB64 is a FREE QBasic compiler for WIN, MAC(OSX) and LINUX : https://www.qb64.org/forum/index.php
Get my Q-Basics demonstrator: https://www.dropbox.com/s/fdmgp91d6h8ps ... s.zip?dl=0
Top

Laptop reliability is abysmal, mostly due to Garmin Updater stopping...

Selected date was the most recent update. I manually removed the Garmin Express app.

Same problem with Windows 7 to 10 desktop:

The Newtonsoft.Json.dll file is located in the C:\Program Files (x86)\Garmin\Express folder... JASON INDEED

So far there was no error since the 26th of April after I copied the DLL file to the folder...

Just re-stalled Garmin Express on laptop and the Newtonsoft.Json.dll file is in both folders now!

This reliability as after I uninstalled Garmin Express without yet reinstalling. Last error date highlighted.
Please acknowledge and thank members who answer your questions!
QB64 is a FREE QBasic compiler for WIN, MAC(OSX) and LINUX : https://www.qb64.org/forum/index.php
Get my Q-Basics demonstrator: https://www.dropbox.com/s/fdmgp91d6h8ps ... s.zip?dl=0
Top 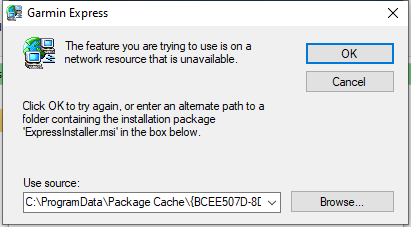 Called Garmin and got called back after more than an hour...sent me following email:

Resolution
Go to http://support.microsoft.com/mats/progr ... uninstall/ and click the Download button
Click Run in Internet Explorer, or download and open MicrosoftFixit.ProgramInstallUninstall.RNP.Run.exe1
Click Accept in the license agreement
Follow the provided instructions to select and uninstall the particular application
When uninstalling Garmin Express select:
Garmin Express
Garmin Express Tray
Elevated Installer
Garmin Update Services (skip if not present)
ANT Drivers Installer x64
When the application displays Troubleshooting Complete, close the application.
This program will need to be run again for each item on the list to be uninstalled
Once the Microsoft Fix it utility is complete, download and install the desired application from the Garmin software page.

This will resolve MSI-related issues when installing or updating Garmin applications.

Please acknowledge and thank members who answer your questions!
QB64 is a FREE QBasic compiler for WIN, MAC(OSX) and LINUX : https://www.qb64.org/forum/index.php
Get my Q-Basics demonstrator: https://www.dropbox.com/s/fdmgp91d6h8ps ... s.zip?dl=0
Top
Post Reply
9 posts • Page 1 of 1