by burger2227
This free Windows 10 upgrade offer still works. Here's why -- and how to get it

In January 2017, I wrote a post titled "Here's how you can still get a free Windows 10 upgrade." It has become the single most popular post I've ever published at ZDNet, and it still gets hundreds of thousands of pageviews every month.

In the months after that original publication, I rechecked, revised, and updated the post several times. After the first few updates, though, I ran out of old PCs to upgrade; so I tacked on a note at the end of the article, asking readers who tried this technique to use the contact form and let me know how the experience went.

Windows 10’s next major update scheduled for release in 2020 will feature a new way to update and install optional drivers. In the changelog of Windows 10 Build 19536, Microsoft has confirmed that the firm is still working on an easier way to install drivers and monthly non-security quality update.

This feature was announced with Build 19536 and Microsoft says users will be provided with a new section in Windows Update to manage optional updates without third-party software or Device Manager.

Windows Update’s Optional Updates section will let you see all optional updates including drivers and monthly non-security updates in one place. This means you no longer need to use an app or Device Manager to update a specific driver.

As of Wednesday, January 15, Microsoft will begin pushing its new, Chromium-based version of the Edge browser to Windows 10 Home and Pro users. We covered the beta version of Chromium-based Edge in November. The beta was still pretty raw then—but "raw" is a relative term. The new Edge project began with a complete and fully functional Web browser—Chromium—so it worked fine for browsing the Web. There were just a few rough edges as far as installing extensions, logging into them, and the like.

by burger2227
Windows 10 Search Is Broken and Shows Blank Results, How to Fix

Starting today, Windows 10 users all over the world have discovered that when they attempt to use Windows Search from the Start Menu to search for a file or application, the results just come up blank.

BING! My laptop has been running at most for 3 days.
Chrome browser needs restarted daily at least once.
Start menu hard to get to open, taskbar may not hide...
Videos do not play or stop over and over
Updates just make it worse! 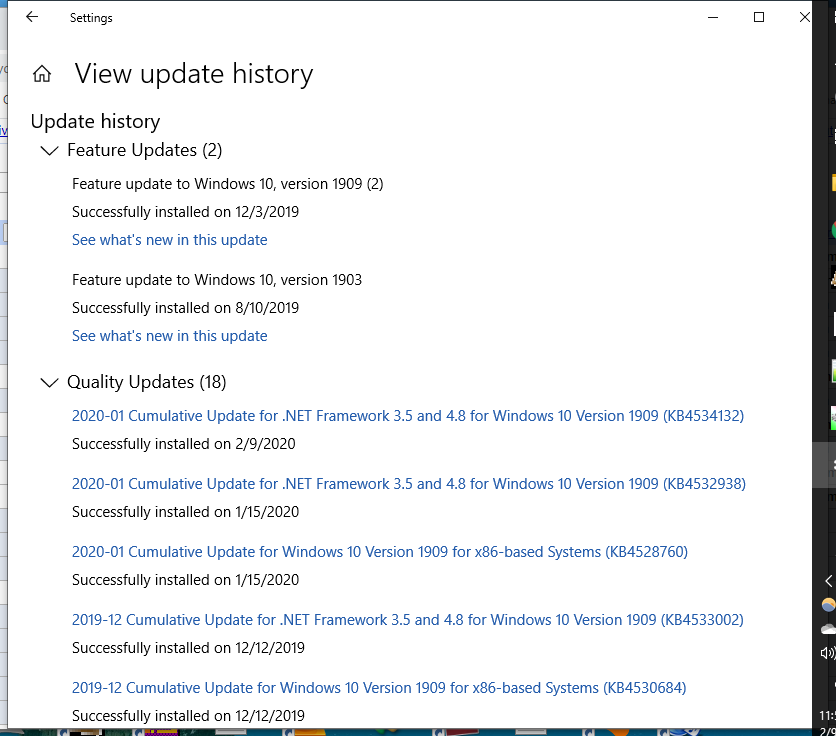 Reports are coming in that the Windows 10 KB4532693 cumulative update is loading an incorrect user profile and causing the user's desktop and Start Menu to be reset to default.

Since then, reports are starting to come in that after installing the update, some users state that their normal user profile is missing, their desktop files are missing, and everything was reset to default. 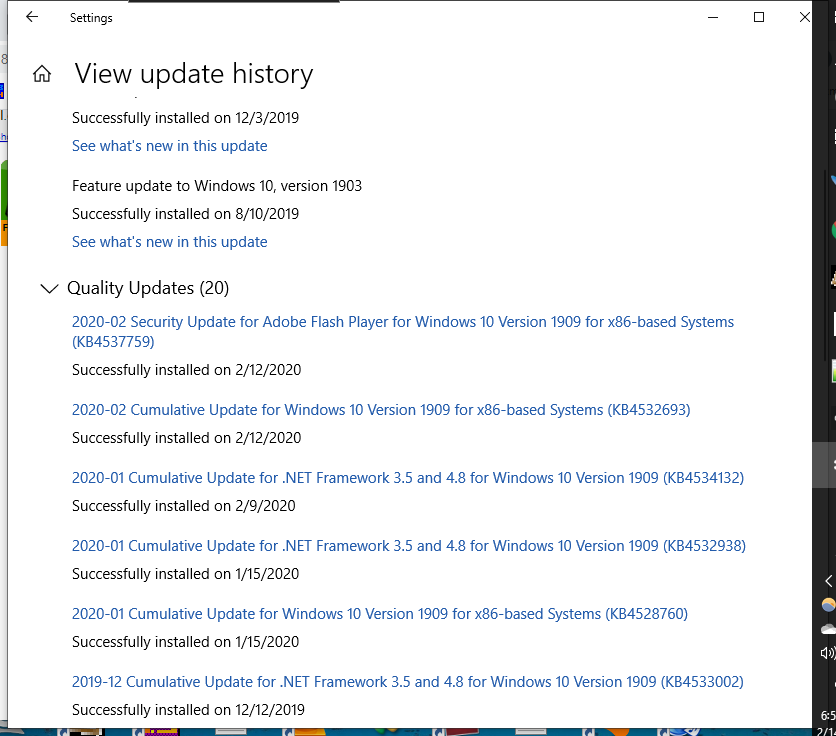 Install newest Prey Windows(XP to 10) app on PC: Prey can protect up to 3 devices free 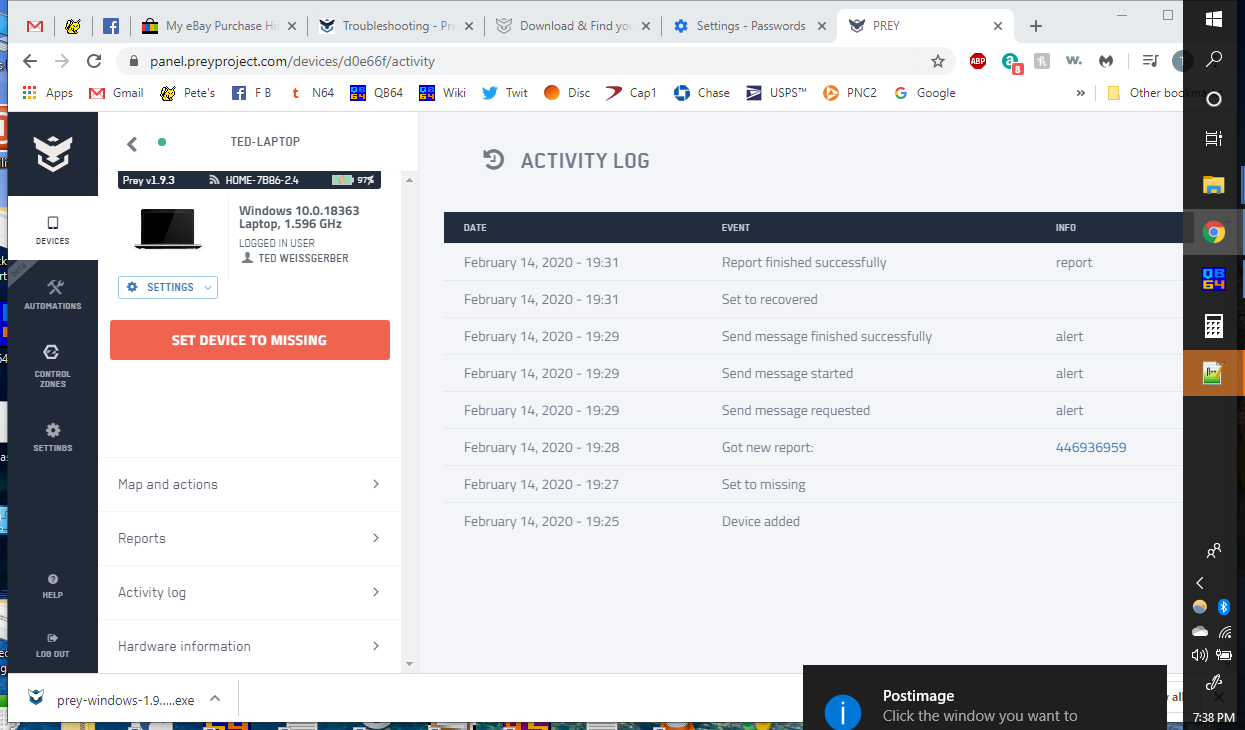 Device on left may not tell you when Last Seen below device. Android items will...yay Google!

I had to set the laptop to MISSING and use options to get an Activity Log about event actions later. Location of device worked...

Down to dark screen wakeup and rebooting with power button!

Windows 10 KB4532693 is for some reason making a temporary user account where those files are kept. By creating a new local account, then transferring the data from the temporary account to the new one, you should get your data back.

This is a convoluted method which requires messing around with user accounts – especially local accounts that Microsoft usually tries to dissuade you from doing (and instead create one using your Microsoft account), and it’s not clear if this will help everyone.

There is speculation that Windows 10’s new-look Start menu will ditch Live Tiles for static icons, and will look similar to the Start menu in Windows 10X, the upcoming version of Windows that Microsoft is designing for dual-screen devices.

We’ve already seen Microsoft introduce new icons to Windows 10 for people testing early versions of the software, so it’s clear that the company is planning to change the look of Windows 10 in the near future.

Giving the Start menu, a part of Windows 10 that most people use daily, a new look and feel is well overdue, in our view.

My Laptop's Start menu refuses to even open...

by burger2227
File explorer improvements in next Windows 10 major update

A bizarre bug could affect some Windows 10 users that try to install the latest Windows release on computers where the BIOS date is set to January 19, 3001, or later on AMD or Intel motherboards.

"It seems if your motherboard BIOS (AMD or Intel) allows you to set a date of 1-19-3001 or beyond, Windows 10 1909 will not finish installing, but locks up during the second reboot of the installation process," as Carey Holzman, an IT professional and YouTuber focusing on computer enthusiasts, told BleepingComputer.

The bug will not go away whatever changes you make to the system's hardware specs as long as you will try to boot off of the hard drive you initially attempted to install Windows 10, version 1909 on.

Multiple users have posted to the Microsoft Answer Forum and the Feedback Hub reporting issues with the update. Some are reporting they are unable to install the KB4535996 update completely; the installation fails with generic error messages like 0x800f0922 and 0x80070003.

One user reported that when trying to install KB4535996, it downloads to 100%, and the install takes considerable time to reach 100%. Once a restart is requested, the machine starts to update on a blue screen where it only reaches 6% and then reboots. The system then warns that it was unable to complete the update.

The update was optional, and users can simply uninstall it. Steps for uninstalling are below:

Since the update is optional, I delayed 7 days until Update Tuesday 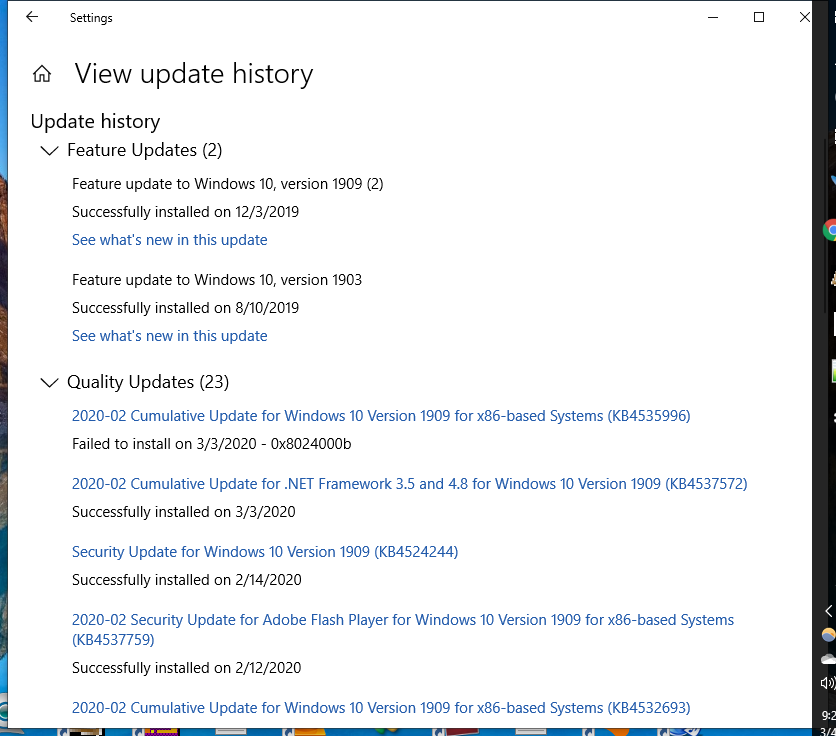 If you can’t boot into Windows 10, then after a number of failed boots, you should see a menu where you can choose to boot into Windows 10’s Safe Mode, which is a pared-back version that allows you to boot only essential parts of the operating system if there is a major problem.

If that menu does not appear, try repeatedly pressing the Delete key or F2 key on your keyboard while Windows 10 attempts to boot.

Once in Safe Mode, uninstall the update using the steps listed above.

Furthermore, there are also other positives. For example, this new "wormable SMB bug" only impacts SMBv3, the latest version of the protocol, included only with recent versions of Windows. 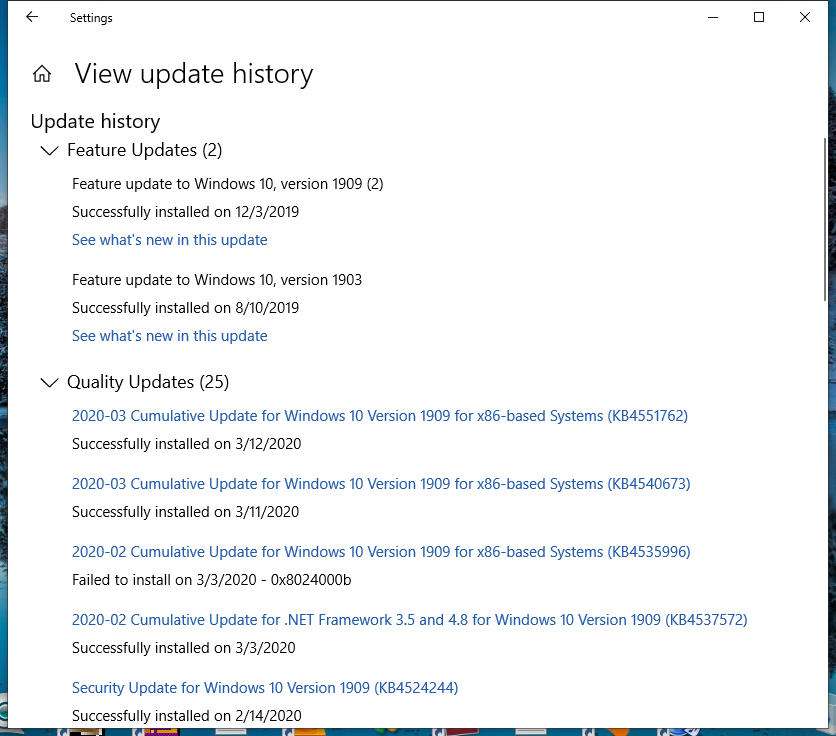 Microsoft has unveiled a new plan for the delivery of automatic driver updates that they hope will reduce the number of reliability issues users experience in Windows 10.

To resolve these types of issues, this month Microsoft will use a new automatic driver update plan that performs gradual rollouts of new drivers to a small group of programmatically chosen users before slowly releasing the driver to the rest of the Windows 10 population.

Microsoft is expected to begin rolling out Windows 10 2004 (the Windows 10 20H1 feature update) any day now. One of that release's biggest new features is the second version of the Windows Subsystem for Linux, WSL2. Just before release Microsoft is making a change to WSL2 that's designed to improve its "serviceability," officials said on March 13.

Windows 10: This kernel malware is why you need Secured-core PCs, says Microsoft

"We actively work with these vendors and determine an action plan to remediate these drivers. To further help customers identify these drivers and take necessary measures, we built an automated way in which we can block vulnerable drivers, and that is updated through Windows update."

Lenovo, HP, Dell, Panasonic, Dynabook, and Getac offer Secured-core PCs, but the cheapest available is Microsoft's $1,099 Surface Pro X. Most of the Secured-core PCs cost north of $1,500 per device. [/quote]

by burger2227
Many reported problems with this month’s Win10 Cumulative Update, but few patterns

I continue to recommend that you not install this month’s patches. While it’s impossible to say whether this month’s patching bugs are worse than preceding months’ – only Microsoft knows the extent of damage, and it isn't telling – it’s pretty clear that lots of people are having problems. 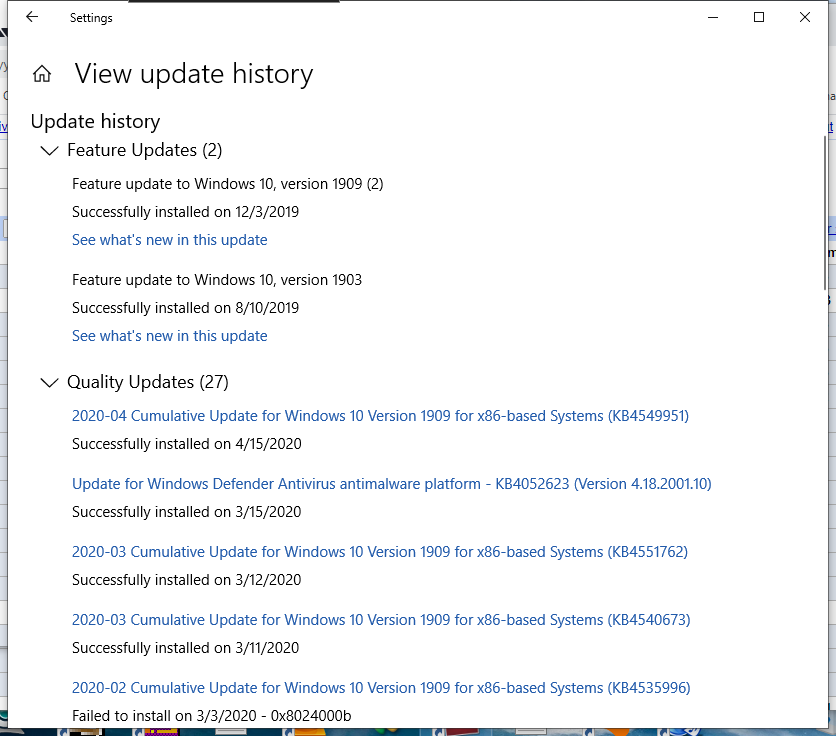 After one day had to uninstall TOO SLOW!

The top Security Update was never listed as installed: That may be next! 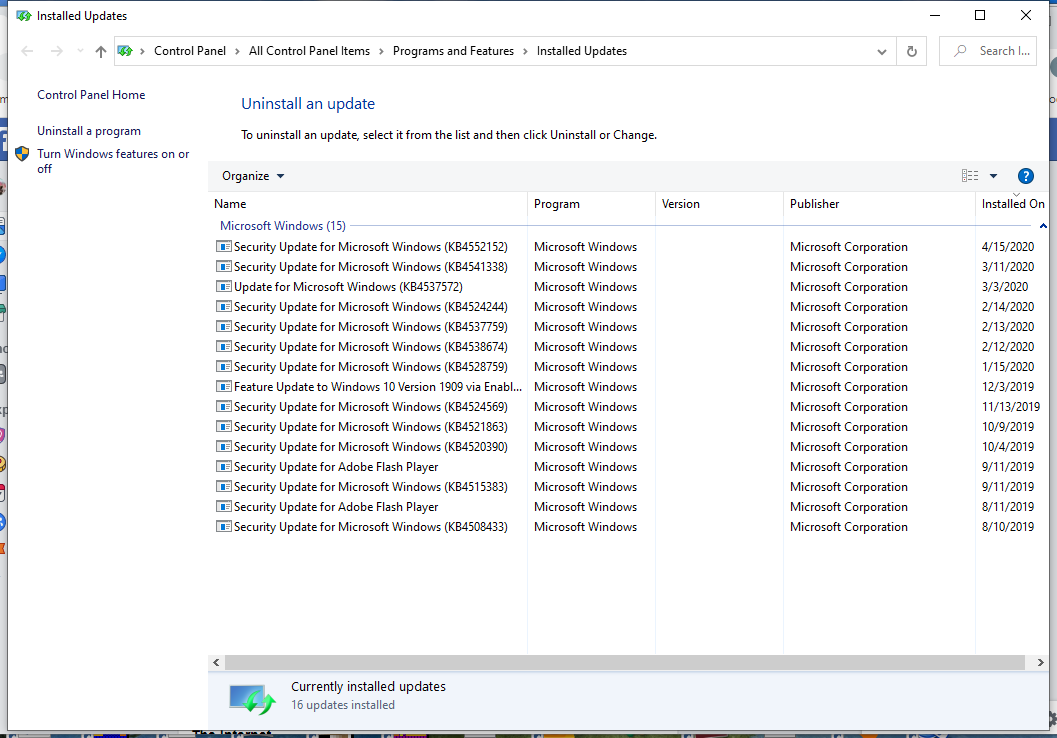 Next I see that TWO Defender updates failed at end of March... 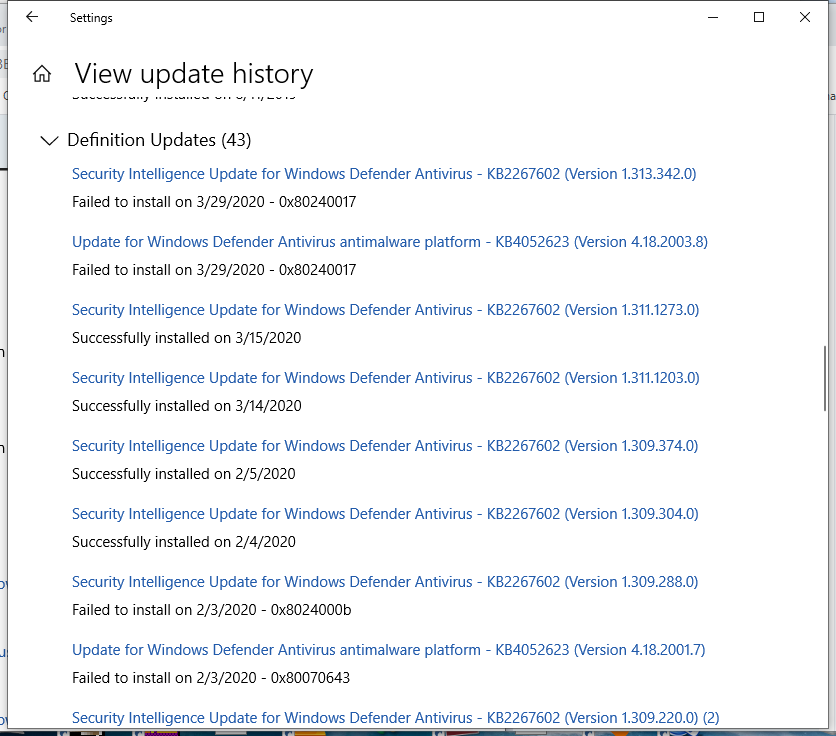 Tired of looking at this for 10 minutes after Settings crashes once... 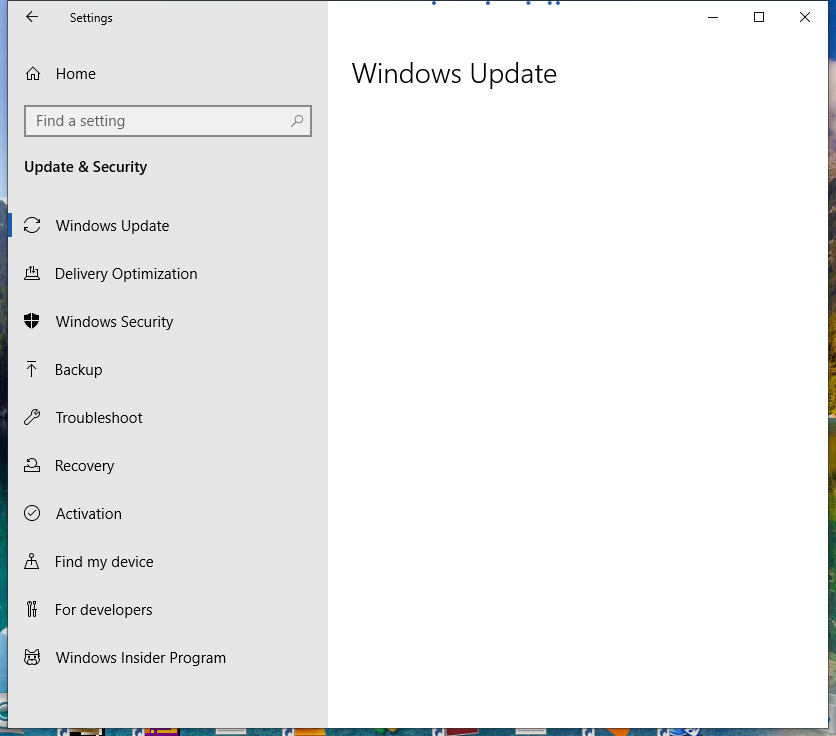 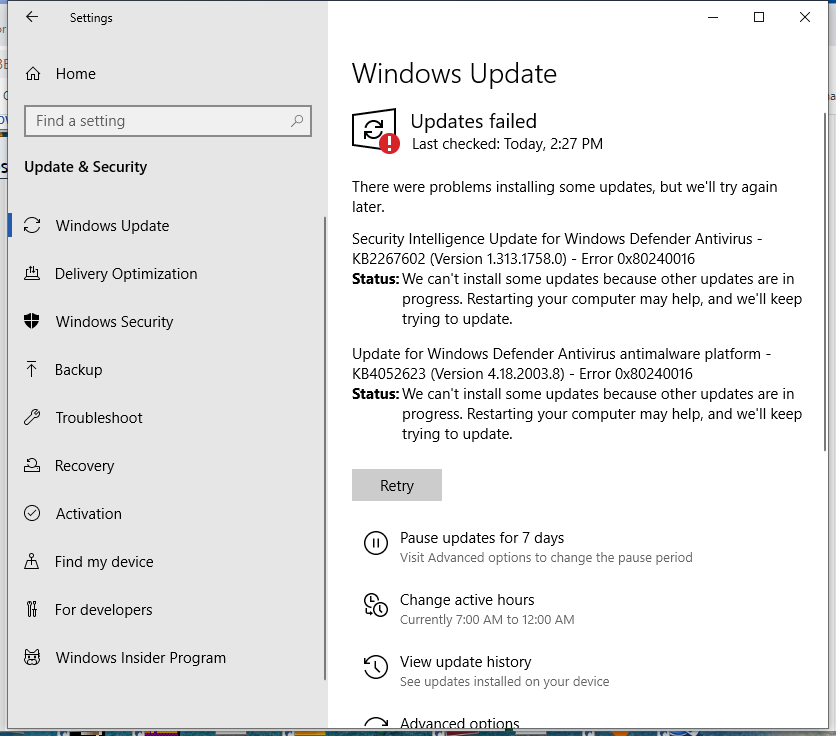 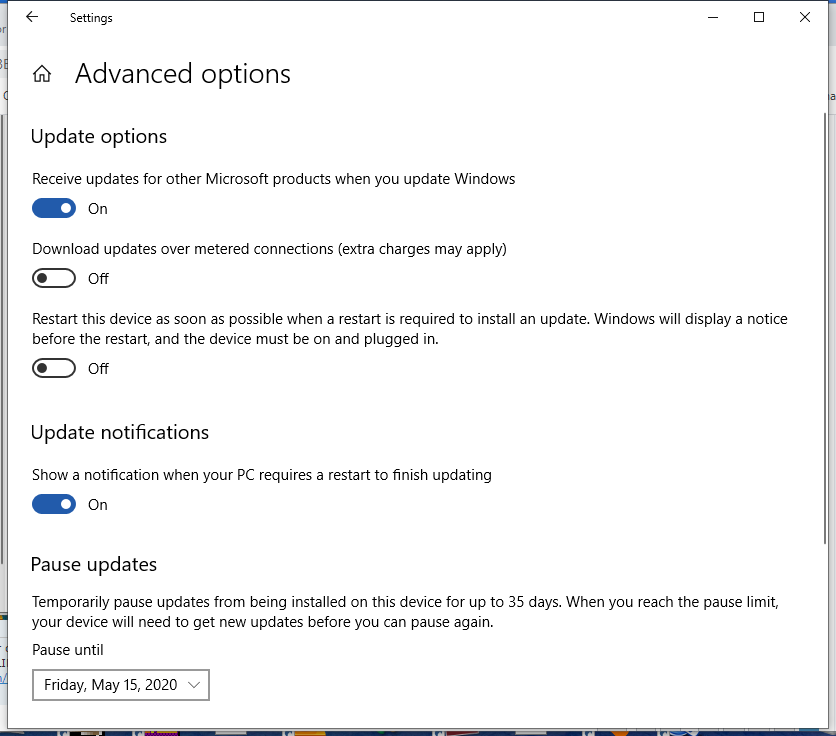 by burger2227
Laptop went black screen so tried to remove other recent update on list: 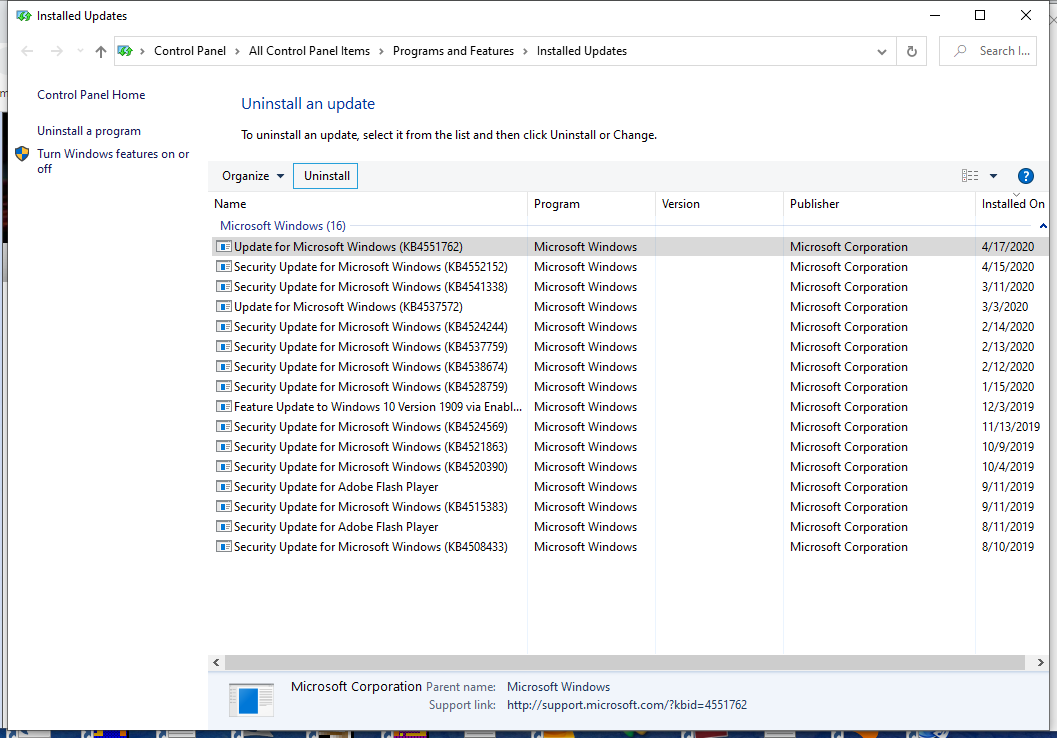 Best thing is that I don't get ANY Notifications or ads!

The next highest patch rate was from Apple at 79%. Linux, Unix, and other network devices had a patch rate of 66%.

“With automated patching and “Patch Tuesdays,” the speed at which Microsoft is able to fix critical vulnerabilities on their systems is remarkable, but there still tend to be a lot of them,”

by burger2227
Had to actually install One Drive on a windows 10 desktop PC I recently bought refurbished from a business.

After installing it signed in without a prompt as I had already logged in previously.

Before that clicking on One Drive did nothing and had no files available for One Note or other apps.

One Drive is supposed to be installed by Windows 10... 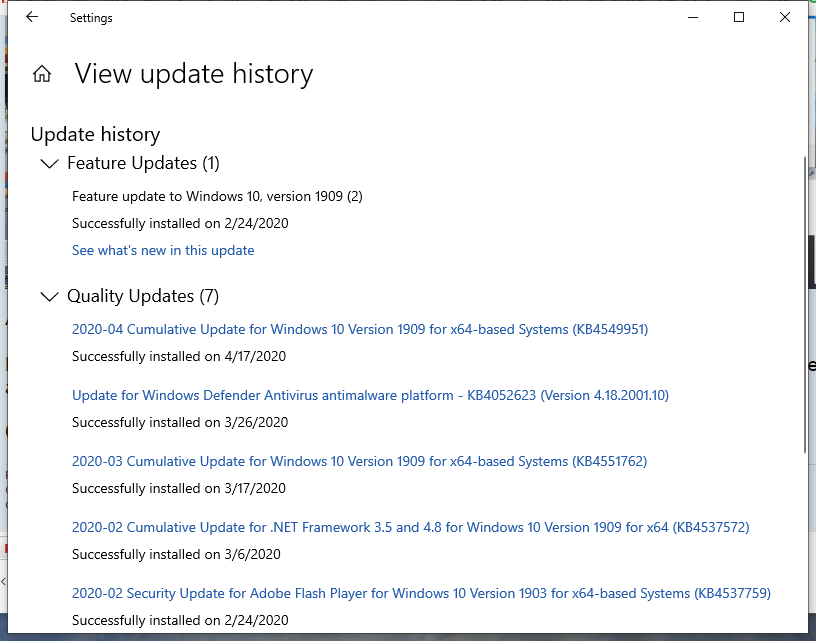 by burger2227
Had 2 top updates listed installed over 2 days and show up as OTHER Updates: 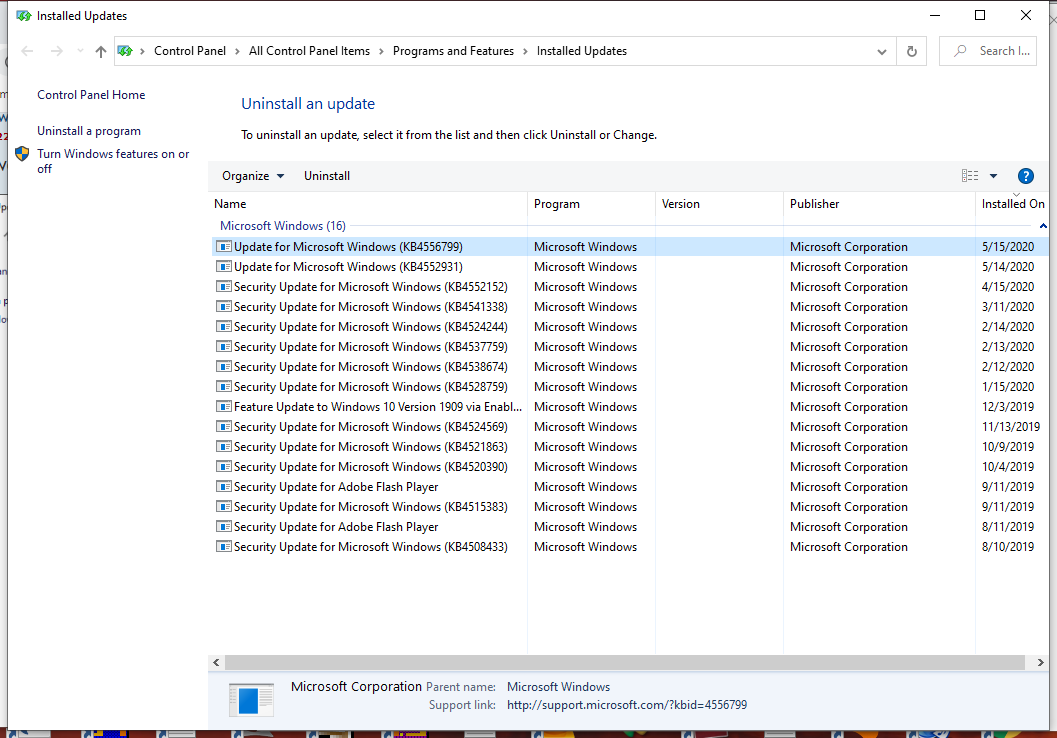 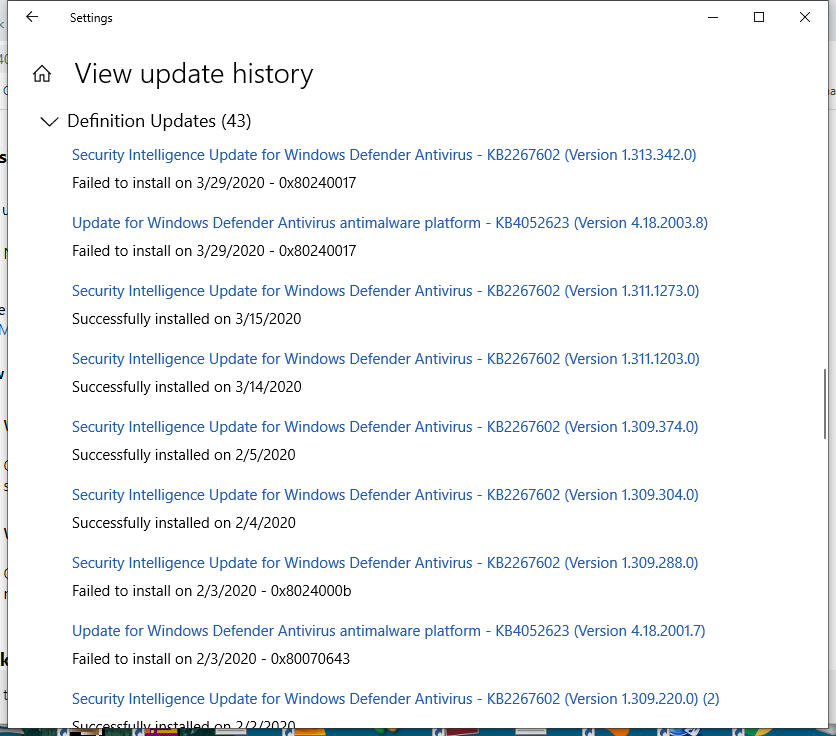 The Defender platform update failed near the bottom... 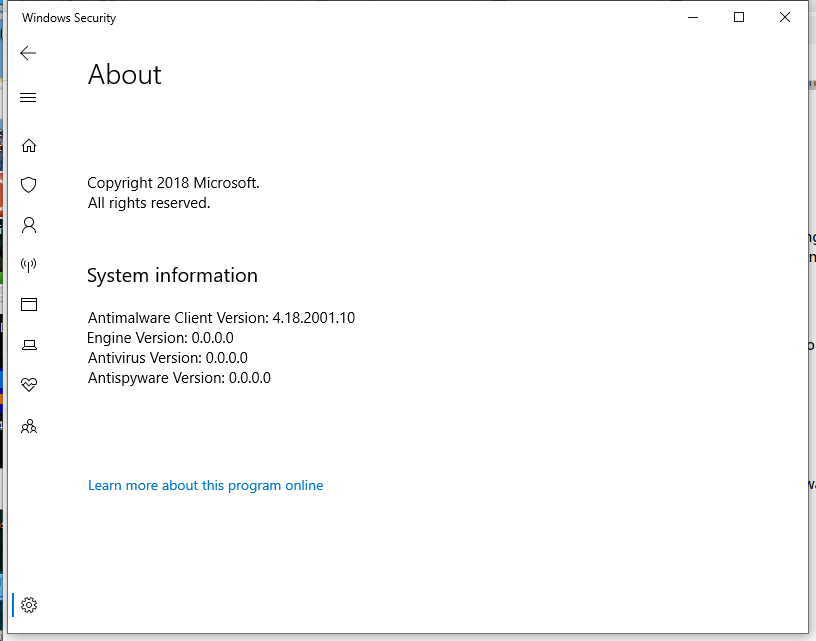 So I go to the Windows Catalog and get a list of THREE EXE files... 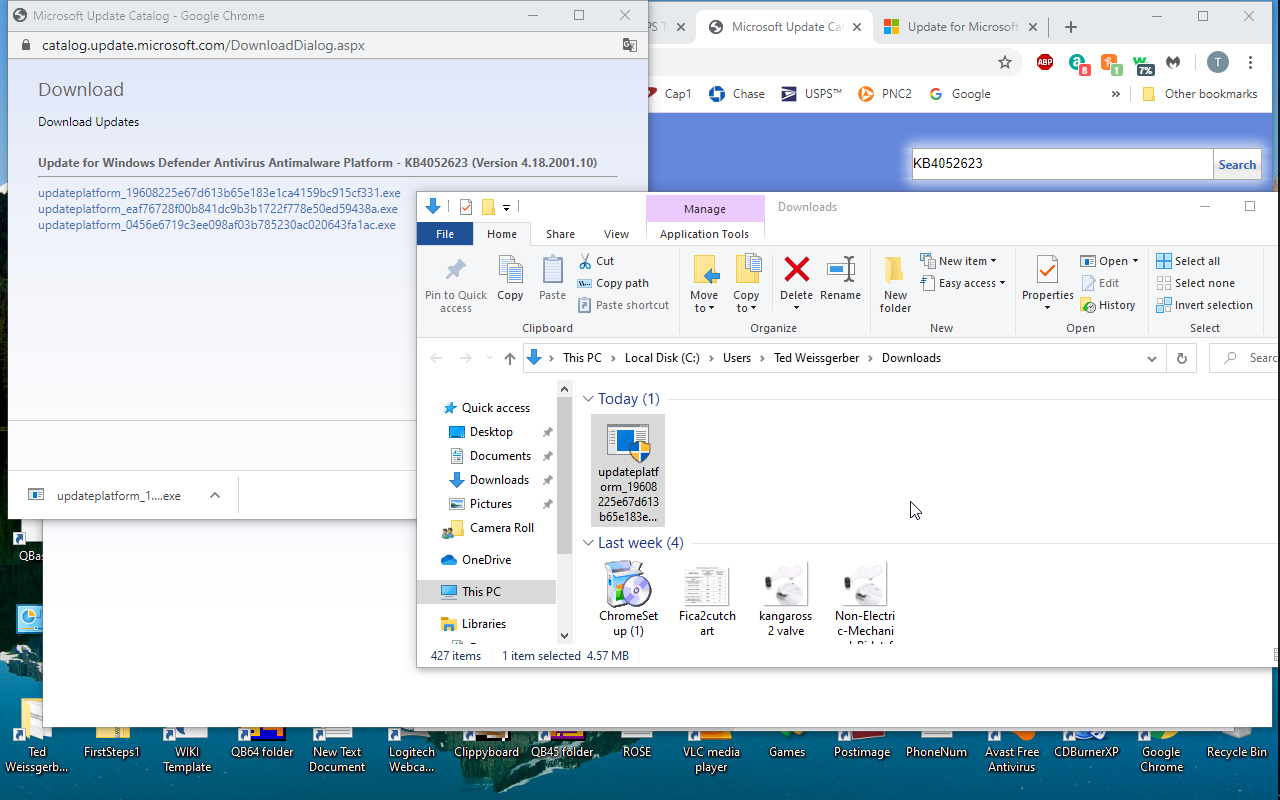 After download, warning says Cannot run this app on my PC!

Now I have 2 unconfirmed files I cannot delete! 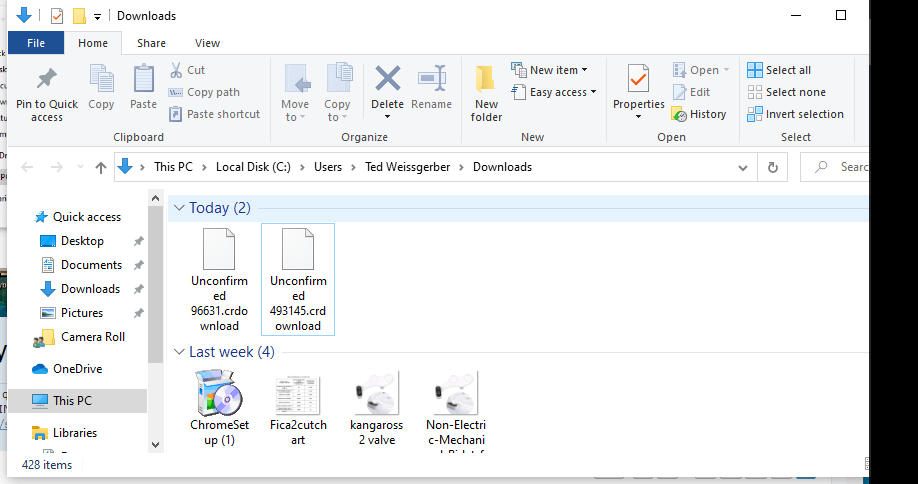 To enable “Reputation-based Protection” you will need to follow the steps below:

When an unwanted app is blocked, you will receive a notification and you can decide if you want to allow the app or quarantine it. The feature will be available in Windows 10 May 2020 update.

To ensure you continue to have a reliable, productive experience with your Windows 10 devices, we are taking a measured and phased approach to how we offer the May Update, initially limiting availability to those devices running Windows 10, versions 1903 and 1909 who seek the update via Windows Update.

Beginning today, the May 2020 Update is available for customers who would like to install this latest release. If you are ready to install the update, open your Windows Update settings (Settings > Update & Security > Windows Update) and select Check for updates. Once the update appears, you can select Download and install. (Note: You may not see Download and install on your device as we are slowly throttling up this availability over the coming weeks, or your device might have a compatibility issue for which a safeguard hold is in place until we are confident that you will have a good update experience.) Once the download is complete and the update is ready to install, we’ll notify you so that you can pick the right time to finish the installation and reboot your device, ensuring the update does not disrupt your activities. 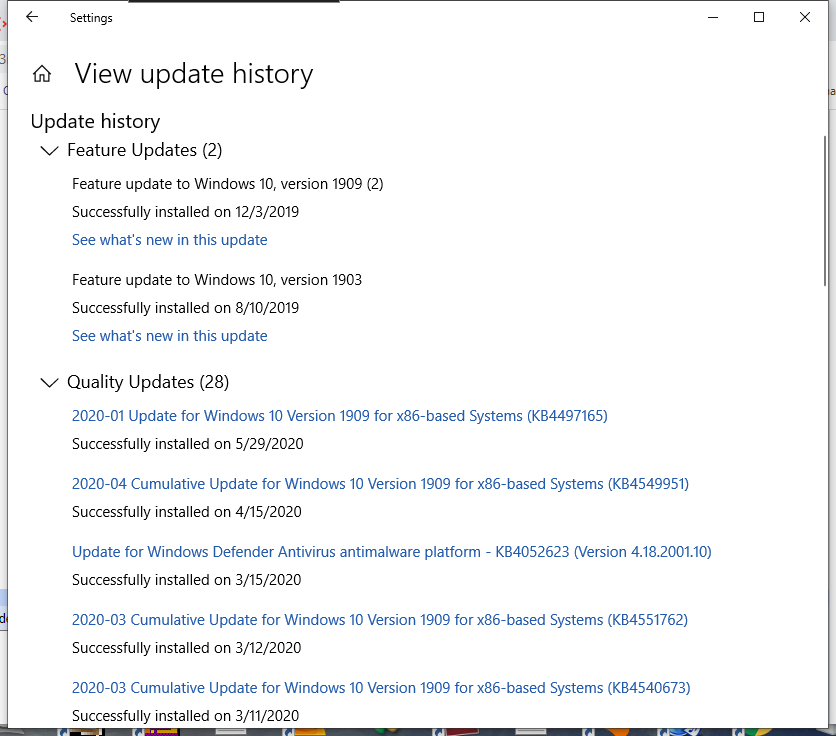 Earlier this week, Microsoft finally released the Windows 10 May 2020 Update to Windows 10 users. The new update comes with various features but also has a couple of known issues.

Microsoft has now updated the Windows 10 update page to indicate if a device is now eligible to receive the update. If you plan to update your system to May 2020 Update and Microsoft has blocked the update, you will see the following message:

So far my 32 bit XP laptop has not gotten this message...
All times are UTC-05:00
Page 9 of 9
Powered by phpBB® Forum Software © phpBB Limited
https://www.phpbb.com/